You have to imagine that in everything that happens, things are related to each other. Interests overlap, one parasitized by the other. The global predictor always recruits its people from the local country elites. Who becomes elite or does not decide the education. An attack on the education system is always an attack on the whole country, because it loses its competences and skills. So if local provincial elites such as the Federal Republic of Germany make the education system inoperative, this so-called elite does not act in the interest of Germany but in the interest of someone else.

Some country elites unite because they have common interests. Others manage to stay independent.

The top priority that all elites and the global predictor should have is to preserve the world as a place to live. Unfortunately, this is no longer the case because the US local elites (the deep state) believe they can win a war against Russia. Earlier was the motto, who shoots first is dead second, today one actually believes, one could win.

In addition, one thinks there, one can outperform the global predictor. This deep state claims the world plus 10%. He is therefore in conflict with the GP, who will not give his own benefice.

But in the US there is a rest of democracy and the people have chosen Trump. Trump – like Putin in Russia – does not belong to the deep state and therefore not to the local national elite of the USA.

Currently the control matrix of the world looks like this: 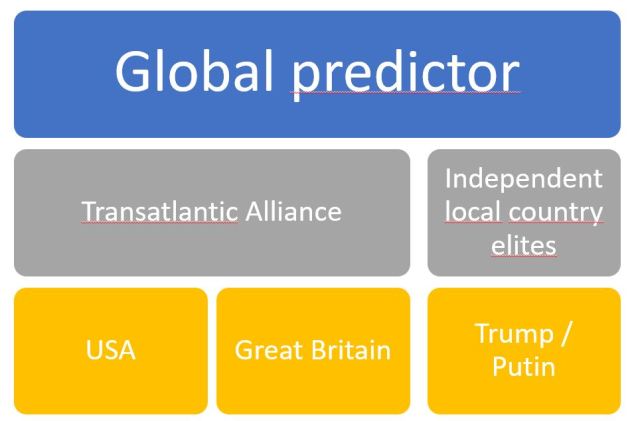 Above, the GP, who structurless ensures that decisions are made in his mind. These include the Transatlantic Alliance with the two US and UK control centers on the one hand and independent elites with Trump and Putin on the other.

Due to the conflict just shown, the GP is forced to take the transatlantic out of the game. And that exactly what happens can be read off two processes

Since the City of London has always benefited from the EU, there is no reason to leave the EU. Unless you want to isolate yourself economically. The same applies to MAGA. Even that only makes sense if you can not or do not want to import wildly, in both cases you have to rebuild your own industry.

And this is the goal of the current transformation:

An Euro-Asian Alliance will replace the transatlanticists. Europe is no longer needed as its own competence center and therefore reformatted, the new engineers come from China and the new religion from Iran or Azerbaijan.

This site uses Akismet to reduce spam. Learn how your comment data is processed.